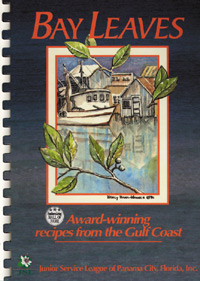 First published in 1975, “Bay Leaves” has sold more than 100,000 copies, was inducted into the Southern Living Hall of Fame, and received Wimmer Cookbooks first Hall of Fame award for reaching this milestone. It includes many local favorite recipes and many people still call it their favorite cookbook more than 45 years later! 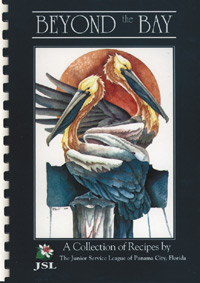 The second installment in our cookbook series, “Beyond the Bay”, was originally published in 1985 and contains more than 600 recipes generously shared by our residents, notable local restaurants and friends from around the Southeast. It also includes eight color divider pages specially commissioned by local artist Paul Brent which showcases the themes of Bay County and the Gulf of Mexico.

Purchase Beyond the Bay

Our most recent cookbook, “Bay Fêtes”, was originally published in 2001 to celebrate the Junior League’s 50th anniversary. The entertainment cookbook includes more than 200 distinctive recipes which highlight the flavors and history of our area. It also provides helpful decorating hints and menus that can be used for many different occasions and celebrations.

Sponsorship Opportunities for 2022-23 are available!

By continuing to use the site, you agree to the use of cookies. more information